This post has been submitted by Newmont Slate
“I am tired of spending money on my slate roof! I don’t know who to believe; one contractor tells me I need a new roof, the other wants to flash my chimney with tar!”

During the twenty years I worked as a slate-roofing contractor I heard many variations of this complaint. I met homeowners who wanted only to hear “good news” and knew contractors who operated solely out of self-interest.

Ideally a customer/contractor relationship would be based on fair compensation, trust and good service. The best are, but they require an acceptance of vulnerability for both parties at the outset, and time to develop. This is a difficult subject to discuss—there are seemingly more exceptions than rules when it comes to people—but managing our homes is a cost of ownership, so tackle it we must.

One option is to engage a roof consultant as an independent party (I know, a little self-promotion), but if you are contemplating a $40,000 investment, confidence in the information you are being given and peace of mind have a value worth paying for. Alternately, you need to learn the basics of slate roofing to be able to make your own informed decisions.

To this end I would like to discuss slate as a material, slate repair, slate replacement and contractors.

Slate as a Material

The ASTM is the American Society for the Testing of Materials. For slate they measure how much water it will absorb, how strong it is and how much it will resist the elements. From this they deduce the average longevity for each type of slate roof. The following table covers the slate found in Homeland:

There will be variations to these figures depending on the roof’s exposure and pitch. Steep roofs last longer, since they shed water and snow more quickly, and roofs with a southern exposure weather more quickly due to more frequent freeze/thaw cycles.

Remember your roof is not just slate. Valleys, chimneys and dormer sides are flashed in metal (in Homeland, painted terne metal or copper), and in the course of the slate roof’s life-time the flashings may be replaced two or more times. Neither replacing a slate roof and reusing old flashings, nor replacing flashings in a deteriorating slate roof is advisable. They should be on an appropriate timeline.

Having said that, we sometimes have to take stop-gap measures with our roofs. We need time while we plan finances for a new roof or are about to put our homes on the market. And here things get more complex. It is a well-known fact that individuals and families spend far less time living in the same house than they did in the past. Big investments, like a new roof, take time to mature. On the other hand, a house with a roof in disrepair is harder to sell, in fact might prevent a sale, while a roof in good repair will consistently contribute to a quick sale. A homeowner who has invested in a new slate roof has added great value to their property and should expect compensation. It certainly is expected when a new kitchen or addition has been added and similarly should be figured into the selling price.

If your slate roof is requiring increasing upkeep and is past its life-expectancy a new roof should be considered. In terms of good, better, best categories I recommend Vermont slate (black or green), LaBaña (Spanish slate) and Grayson (Arvonia, Virginia). All metal flashings should be replaced at the same time.

If you feel your slate roof has not reached its life expectancy then repair is the better way to go. There is a further choice to make: repair with new or reclaimed slate. Reclaimed slate is good slate taken from other roofs for reuse. New slate is typically cut thicker than older slate and when inserted into a roof will cause surrounding slate to “stick up”. These will eventually break due to the stress. Reclaimed slate will match the thickness and have the same or similar weathering to match the existing. The downside might be that some contractors may be unscrupulous regarding the quality of the reclaimed slate. The rule is “equal or better” quality than the roof being repaired. 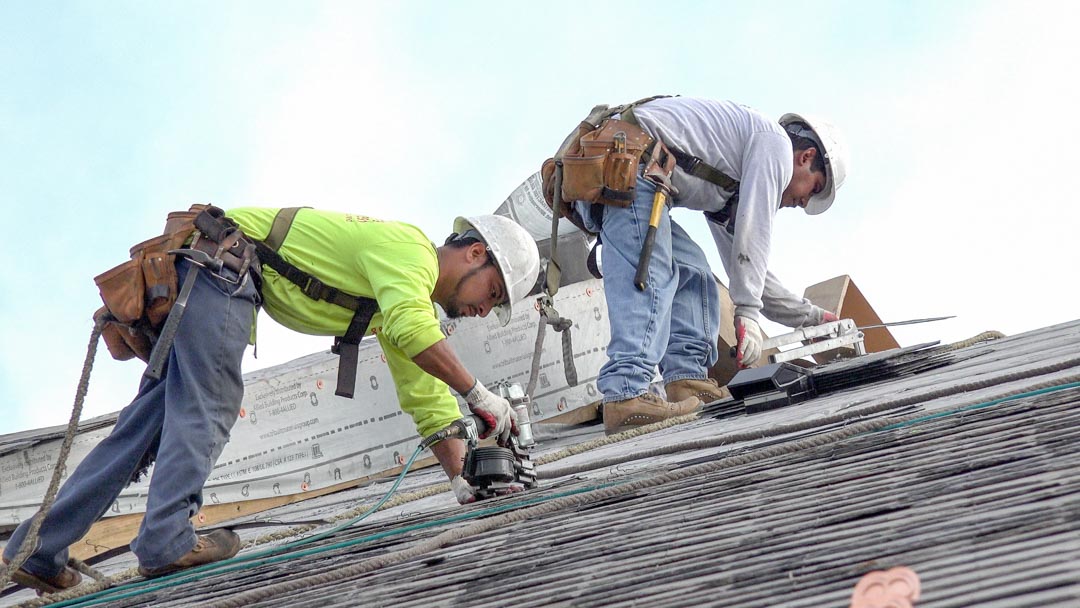 First and foremost your contractor should be licensed and insured. If he has employees they should be covered for workman’s compensation. Anyone willing to risk the alternatives should not be upset if there is damage done to their home or they are asked to pay hospital bills for an injured worker.

Most homeowners have the disadvantage of not being able to see damage that needs repair or the work that has been completed. Neither do they know if the contractor they have hired has sufficient experience in the trade: if they know how to solder, to gauge a roof and to operate safely.

This need not be the case. Contractors should provide before and after photos. More importantly, before they are hired, photos of previous work they have completed. If they are proud of their work, believe me, they take photos— and deserve the bragging rights!

There is a good rule of thumb to apply to maintenance work: the size of the task should be proportional to the size of the contracting company. Replacing a roof is a great undertaking with serious liabilities for the homeowner and contractor. This should not be undertaken by a small company. An unexpected rain-shower can cause untold damage to your home if the roof is exposed. The contractor must have sufficient manpower as well as good judgement to cope with unexpected events.

However, replacing downspouts and a slate repair is ideal for a smaller company. They have a lower overhead, are more flexible and can more easily work around weather interruptions.

The homeowner can participate in this process as well. Good slate roofers do a very demanding and skilled job under difficult circumstances. Asking them for progress reports on the job and making them feel appreciated goes a long way. Make sure they have water and use of your facilities—these gestures will contribute to a respectful working relationship.

This article does not account for every contingency of slate repair and re-roofing. Hopefully it gives you a direction for your own research, and will help make your next roofing decision a good one.