Before and After Home Transformation.

If you’re aiming to make a big change in the appearance of a home, installing a slate roof is one sure way to accomplish that. A home built in the mid-50s in Upper Arlington, Ohio is in the process of utter transformation due to an addition which features a slate roof where shingles had been previously installed. The house was plain and not at all exciting as it appears in the picture taken before work had begun.

The original shingle roof was removed from the entire house, and the second floor was extended to provide additional living space. A new turret entry was built, and an original design was created for installing the slate on this roof. Salvaged Virginia Buckingham slate was installed on the roof, while a veneer was installed just above the foundation and French tile was installed on the exterior wall of the upper floor.

The slates were laid according to a standard installation in the field of the roof. The turret roof pattern was created by Durable’s Bill Koren, the craftsman who installed it. Slates were cut with an oblique curve on the lower edge and were laid in a Dutch-lap spiraling pattern which resembles fish scales. When asked how he came up with this one-of-a-kind pattern, Koren said, “Both the homeowner and I wanted it to look organic because the house is already asymmetrical and straight lines wouldn’t have worked. Also, everything on the exterior is all natural materials – the stone, stucco, slate, cedar – which goes with the organic effect. I knew that I wanted to do something really different, and I made five or six different pattern pieces and came up with one that I liked.”

The homeowner had suggested a scallop shape for the slate, but Koren aimed for something more unique. “I kept trimming it until I could make it work and it would roll all the way up the turret.” The result is a slightly asymmetrical curve for the slate’s bottom edge — neither a straight line, nor a uniformly symmetrical arc. Koren’s innovations met with approval. According to the homeowner, “It was exciting to see the transformation. I never could have imagined how great the custom slate pattern would look. The finial Bill designed is the perfect finishing touch. The turret looks like it was always a part of the house.” 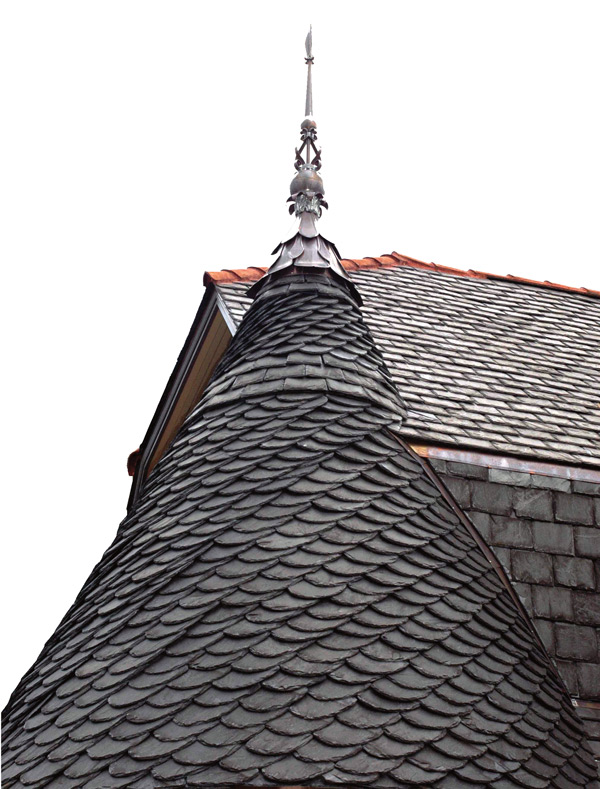 Koren said that making the turret slates curved on the bottom with a tapered top helped the slate to lie flatter toward the top of the turret. Nevertheless, he found that he needed to tie in adjacent rows several times as he progressed. When asked how he kept the slates even and the pattern uniform, Koren replied, “It was laid freeform without chalking a single line. Each slate was nailed with three nails rather than two. It was supposed to be free-flowing and not necessarily perfectly uniform. I wanted it that way because it fit the organic nature of the design.”

What is Koren’s advice for anyone who might wish to attempt a similar installation? “Take your time; you can’t rush it. I would put a slate on and sometimes I’d have to take it off because it wasn’t laying right. Sometimes I had to remove a whole row and re-lay it. I was up and down the scaffolding a lot, looking and making sure it was right.”

Koren’s custom design for the copper finial was greatly influenced by the slate installation. The turret was finished first, and the finial was made to compliment it — the petal shapes continue the organic theme. According to Koren, “It’s nice when you get the creative freedom to fabricate something like that — when you have a homeowner who’s willing to trust you and you can express yourself.”

And how does the owner of this property feel about her home’s new look? “I’m just thrilled with it. Every time I see it, I smile.”

Cherie Downey is Director of Public Relations for The Durable Slate Company, an SRCA member and prominent restoration contractor. She documents and makes known the company’s accomplishments in the fields of historic restoration and traditional building practices.