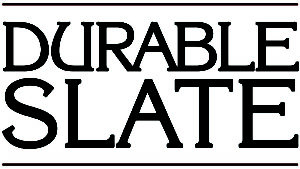 What happens when a board has to make a decision on a leaking, improperly installed, slate roof by a company that has since gone out of business? Read on to understand common misconceptions and errors made in real life scenarios regarding slate installation.

This post is submitted by John Chan of Durable Slate

I was heading to the Omaha airport for a noon flight when my phone rang.  Could I look at a 5-year old slate roof that won’t stop leaking?  I figured I had an extra hour, so I naturally said yes.

I found a beautiful Vermont Purple roof.  The company that installed it was out of business, so what did the Board of the Cemetery do?  They called the top 3 slate roofers in the Omaha area, and there was a unanimous opinion, “The slate was defective.”  They had an architect on the board, and he called the supplier, Evergreen Slate, who told them “There’s nothing wrong with the slate.”

What was the cemetery to do?  They got 3 opinions that were all the same – “Tear off the roof and put on synthetic slate.”  They all said that synthetic slate was better, because “natural slate” froze and broke in cold weather climates. The Board voted unanimously to replace the beautiful 5-year old Vermont Purple roof with some type of “mud flap.”  This was all based on 3 people who didn’t understand or know anything about slate.

What did I find on the roof? Fantastic slate installed by neanderthals. 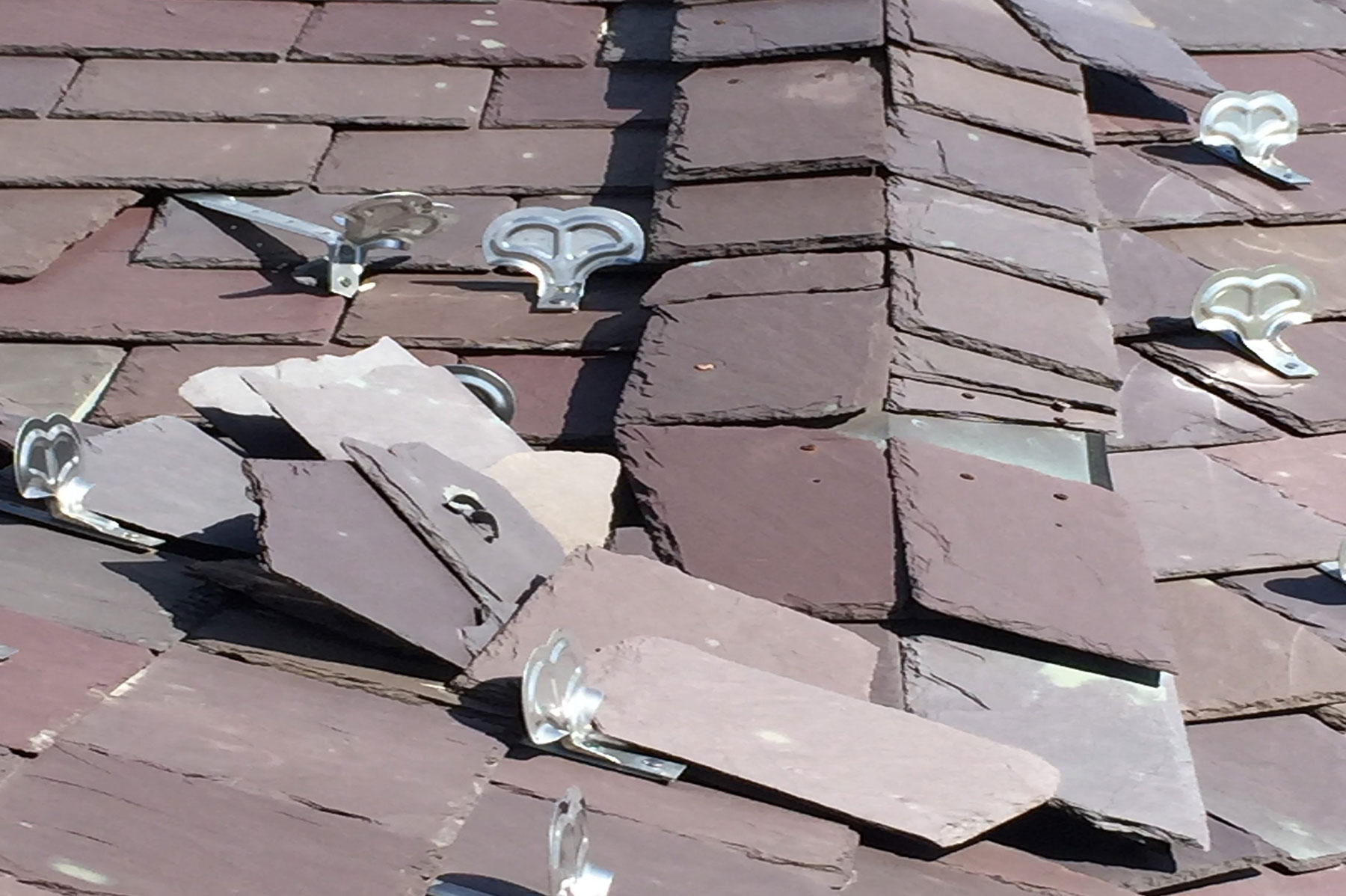 Broken slates everywhere. These guys didn’t know how to install slate.  The slates were over-nailed and under-nailed all over the roof and falling out!

The copper turret had exposed fasteners, and the corner only had Ice and Water shield, because they didn’t know how to close it off with so many different angles.

Also, the gutter sat on a ledge, sloped the wrong way, and the solder joints were bad so the joints got caulked, and there were no expansion joints. 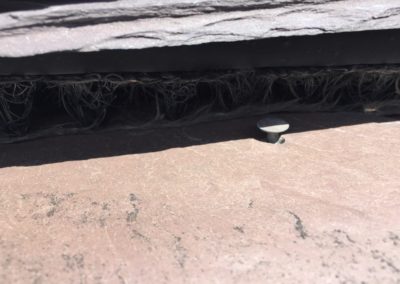 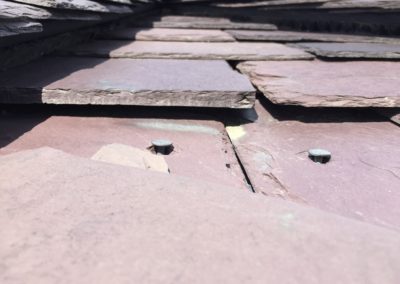 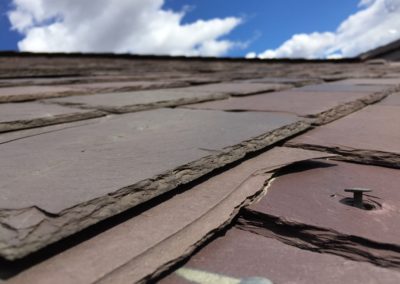 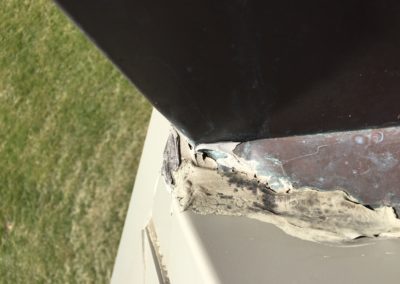 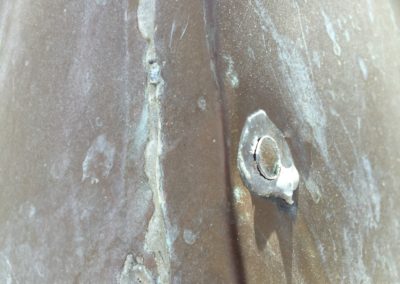 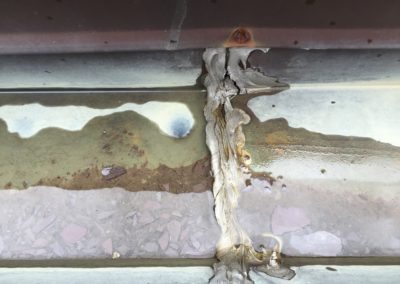 There was also leaks at most every valley – why? 4/12 on one side and 10/12 or 12/12 on the other side installed with no rail or “W” valley.  This detail would STILL leak on a synthetic slate roof. 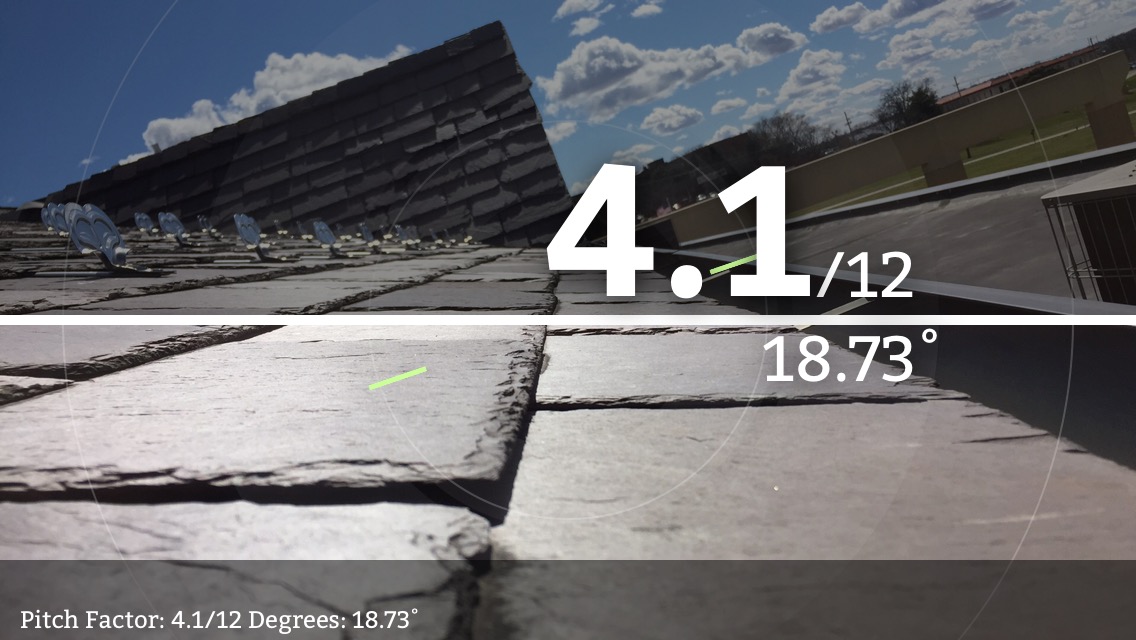 After explaining all of this to the Board, they reversed their decision and cancelled their other contract.  We finished this project 5 years ago and those 20 odd leaks that never stopped all stopped. 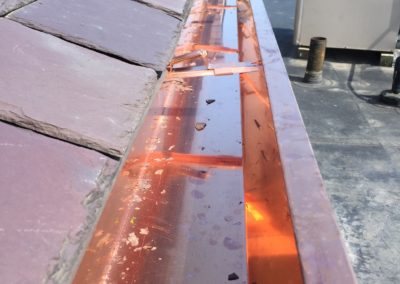 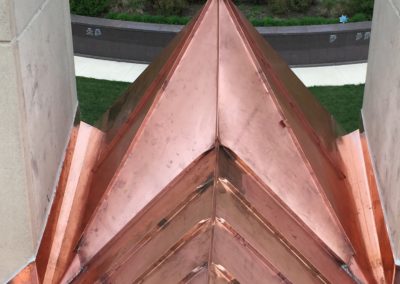 The whole problem of the matter is what I consider the missing link.  There are not competent slate and sheet metal companies in every state.  The big roofing companies are all sold a bill of goods by the synthetic slate manufacturers to tell people that “Slate is too heavy.”  “Slate breaks in cold weather.”  “Synthetics last longer than natural slate.”  “Synthetic slates are new technology that’s better than the old technology.”  And many more lies.

The gist of it is the Cemetery spent about 1/3 of what they would have spent on a new synthetic slate roof, and they now have a 100 year roof.  The gutters, the valleys, the complex flashings would have all still leaked, if re-done in the same manner.  The missing link is EDUCATION!

I’d like to invite you to the National Slate Association Conference and restore the missing link.